Most wheels are extremely simple to lace once you understand the pattern. Figure 1 shows a typical wheel and the lacing pattern is typical to 90 % of motorcycle wheels that you will encounter. Before exploring the lacing pattern, first look into the spoke anatomy. Spokes come in two varieties, hooks and nails. The wheel pictured uses all hooks. That is the spokes have a hook on the end that is secures them in the hub. My BSA C15 on the other hand uses nails with the holes drilled in the hub facing the rim. The spoke is simply pushed through a hole in the hub that directly faces the corresponding hole in the rim and the flat head on the end of the spoke, which looks like the head on a nail (and hence the name), holds it in the hub. whereas my BSA B50 has hooks. 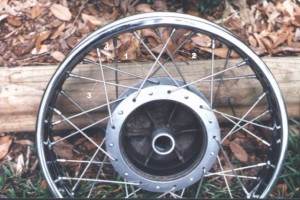 Now look at the pattern in figure 1 wb_spokes.jpg. First note that there are 18 spoke holes drilled in the brake side of the hub and that they are evenly spaced around the hub. There are another 18 holes on the non-brake side. Note also that the holes are staggered from side to side making 36 equally spaced holes around the rim alternating from side to side. Note that the picture is viewing the hub from the brake side. In figure 1 wb_spokes.jpg you can see 4 ‘numbered‘ consecutive spokes going in the clockwise direction on the hub. Spoke 1 is on the outside of the hub, brake side and angles clockwise. Spoke 2 is on the non-brake side, outside and angles clockwise. Spoke 3 is on the brake side, inside and angles counterclockwise. Spoke 4 is on the non-brake side, inside and angles counter-clockwise. This pattern then repeats itself eight more times around the wheel. Your wheel may differ in the exact order of the 4 spokes but will follow a similar repetitive pattern of 4’s. Look at figure 1 again. Notice that on the brake side every other spoke is outside and angled clockwise (like spoke #1). Those alternate with insides angled counter-clockwise. By the way, some bikes such as BSA and Triumph have 40 rather than 36 spokes. In that case there are 10 repeats of 4 rather than 9 repeats of 4.

Before disassembling the wheel be sure to make a drawing of the spoke pattern. This is important so you can put it back together properly. Note that you only need to document 4 consecutive spokes as was done above. Your notes should indicate side of the wheel (usually brake or non-brake), inside or outside, and clockwise or counter-clockwise. Finally, be sure to note which side of the wheel you were looking at with reference to the clockwise or counter-clockwise bit. Make a quick sketch of 4 spokes. 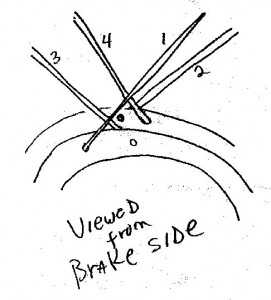 Figure 2 wb_sketch.jpgshows a typical sketch for a wheel. You also need to note the rim offset. Place a straight edge across the brake drum and measure the distance between it and the rim. 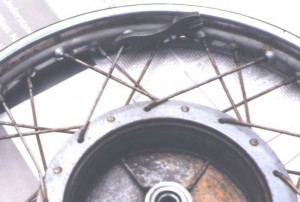 Figure 3 wb_wrench.jpg shows a spoke key being used to loosen the nipples on this wheel. This universal wrench fits 6 common sizes and at about £3-00 the spoke wrench is a superb investment. Note that most nipples have a screwdriver slot in their head but usually the end of the spoke protrudes into the slot making it impossible to grip with a standard screwdriver. Also if the spokes are rusty a screwdriver may not be strong enough to break them loose. Use the spoke wrench to loosen the nipples until they can be turned with a screwdriver. Also a reversible electric drill with a screwdriver bit in the chuck helps take the nipples off quickly. By the time you unscrew 36 spokes your wrist can get very tired. After removing the nipples the rim should lift free of the hub and the spokes can be removed from the hub.

Now that you are ready to put the wheel back together. Clear off a good 3 to 4 feet of workbench and put down newspaper so you have a good clean surface on which to work. Then as things get messy just lift off the top page and discard it. Set the flat side of the hub on the workbench. And identify the spokes. If you have hooks notice that the hooks come in two varieties. Inside spokes have hooks with less angle than the outside spokes. Separate the spokes into two piles, insides and outsides. Also some wheels like that BSA Bantam have short spokes on the brake side and long ones on the non brake side. If that is the case, further separate them into longs and shorts. Now start threading the spokes onto the hub in the proper inside-outside orientation until all holes are filled. If you have nail type spokes you job is even easier – just push them in their holes. Again lay the hub flat on the work bench and arrange the spokes in their clockwise-counterclockwise orientation as per your diagram. Now take the rim and lay it over the hub and spokes.

Note that holes in the rim are drilled to face one side or the other and to accept either clockwise or counterclockwise spokes. Rotate the rim until the pattern of the holes in the rim matches the spoke’s orientation. If you cannot find a fit, try flipping the rim over. When properly oriented each spoke should point to a hole in the rim that is aligned with it. Always start with the bottom-most layer of spokes (outsides next to the bench top). Put one spoke in a matching hole in the rim and loosely screw a nipple on to it (just 2-3 turns). Note that you should put a drop of oil on the threads before starting the nipple to preserve the threads and so you can adjust for proper torque. Skip 4 holes and put the next bottom-most spoke in that hole and start another nipple. Go around the wheel until all bottom spokes are in place. Now do the next layer of spokes (bottom inside) put each in its respective hole and start the nipples. Now come up to the top inside layer and do it. Finally, align the top outside spokes and start their nipples. At this time you should have what looks like a complete wheel. Check carefully at this time for correct orientation of all the spokes. When satisfied that things are as they should be go around and screw the nipples in just to the point where the hub starts to become firm in the wheel. It is important that all nipples are screwed on to the same amount in this step so that the wheel will be at least close to properly aligned. For example, you might turn each nipple until the spoke body is just visible in the screw driver slot. You will have to use your judgement here as it is impossible to predict what length your particular spokes will be. Do not attempt to torque down any nipples at this point.

A wheel stand is a useful tool for aligning a wheel but is not a necessity, although you could make something similar from angle iron. You can manage by clamping the axle in a vice to hold the wheel firmly so it could be spun to check for alignment. Note that the wheel stand has a pointer guide attached to it which can be positioned near the rim to check for run-out as the wheel is spun. If you are using a vice tape a piece of coat hanger wire to the edge of the bench to serve as a pointer. The key to truing the wheel is to understand how the spokes move the rim. Lets say you spin the wheel and find a high spot. Assume that the high spot is on the left side of the wheel in figure 5 wb_true1.jpg. The figure shows how to move the rim to the right relative to the hub. To do that you loosen spokes on the right side of the wheel (indicated by red) and tighten the corresponding spokes on the left side of the wheel (indicated by yellow). To move the rim from side to side you tighten spokes on the side you want the rim to move toward and loosen those on the other side. By repeatedly adjusting spokes you should be able to get the rim so that it runs true when spun. Initially get everything within 1/8 of an inch maximum wobble. Take your time and think about what you are doing. A little piece of masking tape can be useful for marking a high spot.

Getting the proper tension on the spokes.

Spokes can be tightened to a torque spec but few of us have torque screwdrivers. If the spokes are too loose the wheel will flex back and forth as you ride the bike. Too tight and the hub may explode. Use the ear method to determine the correct tension. Tap a loose spoke with a wrench and it has a dead sound. As you tighten it makes a nice ringing sound who’s pitch increases as you continue to tighten (just like a guitar string). Under proper torque the spoke should have about the same pitch as that of an empty wine glass when tapped with a fork. Go and tap some spokes on an assembled wheel to get a feel for the sound. Once the wheel is true, go around and tap spokes. Tighten them little by little until they all have a nice ring. After tightening one spoke a turn or two tighten the spoke on the opposite side. Tap and listen. Go around the wheel several times sort of at random so that you do not loose your alignment by tightening up spokes on just one side of the wheel. Eventually all spokes will be adjusted.

Now do the final truing as the torque down of the nipples may have put the wheel back out of alignment. Make the final truing using the same procedure as above but now the spokes will be much tighter. In order to true up the wheel some spokes may have to be tighter (higher pitch) than others. That is to be expected especially if your rim has some dings in it.

Where to get parts

A good chrome plating shop can often re-plate a rim for about 1/2 the price of a new one. Painted rims can look effective, especially black with gold pin stripes, until you try to fit the tyres. A tip for Triumph owners who find the 40 spoke rims hard to find: the old Honda 750s also used 40 spoke wheels and they will fit a Triumph. Good Honda rims are usually plentiful at your local junkyard (or were last century, when this article was written.), but a purist will notice that the rims are Japanese.

Notes:
This article is by Cedric Norman, copied from an article on the Wayback Machine, an archive of a page at ntlworld.com/cedric.norman/classicbikes/ which refers to the viewer to @classicbikes.org.uk. That domain is not active and searches for the author were unsuccessful.